The Relevance of Physical Activity Contexts in the every-day life of adolescents study (REPAC) prolongs the ideas behind the cross-sectional study, Goodness of Fit in Norwegian Youth Sport that was finalized in 2013.

The Goodnes of fit-study was based on data from a random sample of 2055 Norwegian adolescents (mean age 15.3 years) and showed that

Adolescents are typically involved in three different activity contexts outside the family. They are all involved in Physical Education in school and they may be involved in organized youth sport and self-organized physical activity outside school. The overall aim of REPAC is therefore to generate new knowledge on how these three major physical activity contexts in the every-day life of adolescents affect behaviour and development during adolescence (13 – 19 years). Questions regarding social equity and possibility for change in the public health policy targeting adolescents will be at the forefront of the researchers work throughout the project.

REPAC is framed in recent developmental science perspectives. Developmental science today “addresses the full spectrum of human thinking, feeling, and behaviour and how they vary from one culture to another – and it is concerned with children’s future as well as the future of the society” (Lamb & Bornstein, 2011:1).
Developmental science seeks “to describe, explain and optimize intraindividual (within-person) change and interindividual (between-person) differences in intraindividual change across the life span” (Lerner, Agans,  DeSouza & Hershberg, 2014). In doing so, emphasis has been placed on integrating biological, psychological, social, and behavioural factors, at several, yet integrated and reciprocal, levels. Thus, according to Magnusson and Stattin (1998), an adolescent’s behaviour and development must be analyzed in relation to the dynamic individual-environment process in which he or she is embedded. Without knowledge of this total process, it is not possible to understand how various individuals function and develop.

In REPAC the developmental process is viewed as a complex and life-long process, where social reflection, processing of contradictory information, negotiation, and compromise are paramount (Lerner & Damon, 2006, Lerner et al., 2011). Adolescents are working on the construction of the self on a daily basis, and modern perspectives on the developmental process explain how and why young people of today think and act differently from adolescents of only a couple decades ago. Because these recent perspectives are first of all based on changes in society, it is reasonable to consider these perspectives as the foundation for any new advance with regard to how young people interact, experience, act, and develop within movement contexts inside and outside school.
=> Back to index

REPAC contains three integrated sub-studies: (1) A longitudinal study; (2) an intervention study, and (3) a qualitative study.
The primary aim of the longitudinal study is to assess adolescents’ activity involvement, and their content descriptions and experiences from three interdependent movement contexts in adolescents’ every-day life. Based on the collected data the study will measure specific and relative effects of the three contexts on adolescents’ behaviour and on variables reflecting developmental processes.

The primary aim of the intervention study is to document whether an interest based and self-determined PE can change students’ experiences of PE, their motivation and eagerness for PE, and eventually their developmental process when extracurricular activity is controlled for. Students participating in the intervention study get the opportunity to choose between a conventional sport-oriented PE and an explorative movement-oriented PE. The students were invited into the program in their second year – after the first data wave. The effect of the intervention will be measured using the longitudinal data while qualitative methods will be used to get a deeper understanding of students’ experiences of the intervention.

The primary aim of the qualitative study is to perform analyses of lived experiences of PE.
=> Back to index

The point of departure of REPAC is that human beings, and thus adolescents

The longitudinal study will contain three waves of data collection. The first data collection was conducted spring 2014 (when the students had almost finished their first secondary- or upper secondary school year), for then to be repeated spring 2015 and 2016. The intervention program will be conducted during the students 2nd year (after wave 1). The qualitative interviews with the sub-sample of the intervention group will be conducted right after the first year of intervention.
=> Back to index

The quantitative analyses in the proposed study will involve regular longitudinal variable-oriented analyses as well as person-oriented analyses. In physical activity and health related research most approaches to data analysis are variable-centered, yet are often interpreted as if they say something about individuals.

Person-oriented psychology (Bergman, von Eye, & Magnusson, 2006) posits, therefore, that instead of being universal, development of behaviour should also be seen as being specific to individuals or groups of individuals. The person-oriented methodological approach assumes that individuals are unique and that their uniqueness is knowable, and therefore groups of people can be clustered around this uniqueness. In the proposed study such clustering will be performed, in addition to other analyses such as structural equation modelling (SEM) procedures, trajectory analysis involving both variable-centered growth curve analyses (Hierarchical Linear Model, HLM) and pattern-centered mixture models (Latent Class Growth Analysis, LCGA), to address our questions.
=> Back to index

The point of departure of the proposed project is that it will explore interdependent contexts and intermediary factors that may affect health behaviour and positive development during adolescence that have hitherto been overlooked. Due to the theoretical approach and the design of the study, the study will provide further data on the role of activity contexts in the lives of youth. In particular, the study will examine the relative contribution of three different movement contexts on adolescents’ behaviour and development. Finally, based on data from the study it will be possible to discuss the potential benefits of alternative pedagogical approaches to PE in school.

The longitudinal and multi contextual design and the relatively large sample including adolescents from four different counties of Norway will make it possible to address the relevance of public promotion of movement activity in the every-day life of adolescents, and how these contexts contribute to social equity. It is expected that the study will be of significant relevance for the development of public health policy targeting adolescents in the future.
=> Back to index

Ethical aspects will be at the center of attention in the project, and Norwegian privacy legislation and ethical standards for conducting research is adhered to in the context of creation, storage, analyses of the material, as well as in reporting of results.
=> Back to index 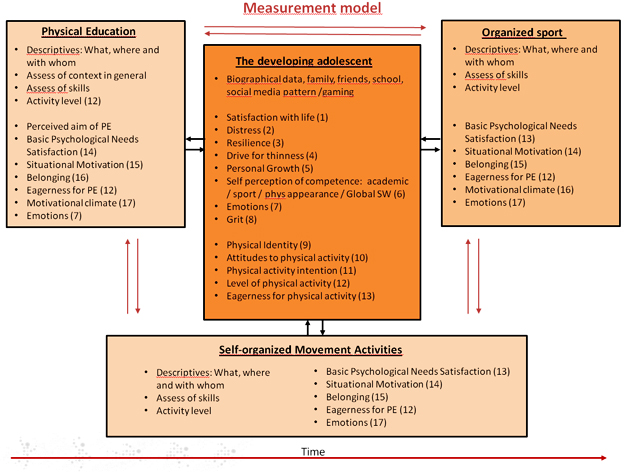 REPAC was developed in collaboration with the Institute for Applied Research in Youth Development, Tufts University, MA, USA. The project has been governed by the Norwegian School of Sport Sciences and has been conducted in collaboration with the University of Agder, Hedmark University  College and Østfold University College. The daily management of the study has been performed by Professor Reidar Säfvenbom at the Department of Teacher Education and Outdoor Studies, Norwegian School of Sport Sciences. From January 2021 he is leading a research group of four.